Baghdad, Iraq has been ranked as one of the worst capital cities to live in. this is mainly because of the recent war and the conflictÂ that still occurs in the country today with the situation in Syria. Although there have been improvements in many areas, including the capital city. But there is still social stigma attached to the city and region and it is hard to show the city in a different light. 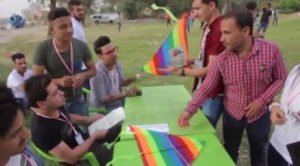 But a recent festival in the city has made a big step in changing that. The city recently played host to a kite-flying festival. The festival, called Orshina, was held in the Abu Nusa Gardens of Baghdad. The festival organizers are hoping that this festival will show a different site of Iraq and its citizens. More than 1,000 people attended the festival, including many musicians and entertainers who provided help and performed for all those that attended. The organizers estimated that there were close to 400 kites launched during the festival.

“All the world mentions [is] that Iraq is the country of the war, and it is represented as ISIS and bad things – but actually, no – Iraq is represented by life, love, and [all] good things,” said Muhammed , a local who attended the festival. “Can you see how people love their life, and how they are brave, and how they always choose the best things?” he said. More of these events and festivals are planned to show the rest of the world that some parts of Iraq are ready to begin the healing process and move forward as a nation.