Instead of Ceremonial Cutting of the Cake, this Wedding Couple Smashes a Piñata

When the Clayton Lee and Karen Chan decided to get married last May in Palm Springs, California, they decided they wanted something different for their wedding cake. Instead of having the traditional slicing of the cake at their wedding, they would have something a lot more fun. They had a piÃ±ata shaped and designed like a wedding cake to be smashed at the reception. The opening whacks were made by the bride and groom. 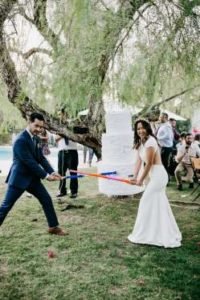 The piÃ±ata was made by Amazing PiÃ±atas in Los Angeles, California. The piÃ±ata was full of the traditional scatterings of candy, chips, confetti and poppers. It also had bubbles, LED sunglasses, mustaches, and even glow in the dark jewelry. Once the piÃ±ata was broken open by the newlyweds, the kids at the reception raced to get their hands on as many goodies as they could. But those that were not able to join the scrum for candy were still able to get their sweet tooth sated, as churros and dulce de leche was served to all the guests. 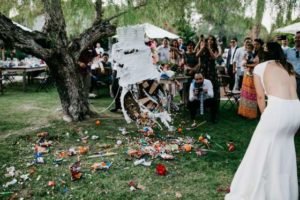 “We actually don’t really care for cake and frankly, we felt it was a low-priority wedding item,” said Chan, “We just loved the idea of a piÃ±ata â€• they are so fun! And the fact that it was a cake shape, was a small act of rebellion against the cake tradition.” According to the couple, the guests loved the piÃ±ata idea. All the kids and even some adults rushed for the goodies that spilled out after Lee tackled the piÃ±ata for the final blow.