22-year old Polisi was driving without a license when he was stopped by local cops. When they asked for his name, they were shocked to find out it was Polisi. Like many Indonesians, he goes by a single name. He told authorities in Pasuruan in Java that he was a construction worker with meager wage working as the sole breadwinner for his family. His story and his name intrigued the arresting officers. Not only did they give him a pass at the traffic ticket, but they offered him a job as a police officer. 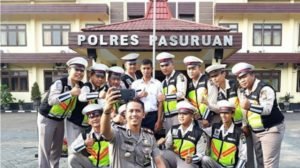 A video of the incident was taken and has since gone viral. The kind officers were applauded for their sympathy towards Polisi and his plight. According to reports, Polisi might be working for the actual Polisi by the start of next week. His position in the police force is ironically helping the police conduct driving license tests.

“I’m nervous since I never worked in an office environment before,” he said earlier this week. But Polisi had a lot of help, specifically from the head of traffic police unit, who had originally stopped Polisi on that fateful day.