A slum area located at the Island of Java in Indonesia recently became a tourist attraction and a social media sensation after having all of its houses painted in vivid colors. The changes made to the facades of most of the buildings in the village transformed what was once a poor town into what tourists are now calling the Kampung Pelangi, or the Rainbow village. 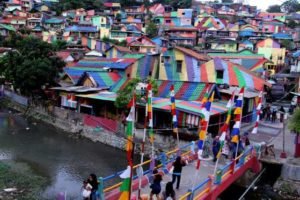 The local village is located by a hill side and was predominantly occupied by the poor. That’s when the local government of Semarang implemented a month long rejuvenation project that cost over 300 million rupiah ($22,500). The project involved painting most of the village walls and roofs with bright colors and intricate artwork. The village is located 450 kilometers east of Jakarta. Since the repainting of the village, tourists from all over the country and the world have flocked to take pictures of the brightly colored buildings in the village. 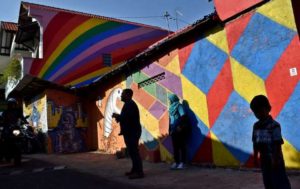 The painting of the village was designed and planned by Slamet Widodo, a 54-year-old high-school teacher. Widodo says he was inspired by many similar projects that were located in other regions of Indonesia. The residents have also greatly benefited from the makeover of their town. The benefits are mostly economic, as the tourists and visitors that frequent the village have opened up new opportunities for the local community for business.

“In the future it will bring benefits to our community, especially economic empowerment. The project will be supported by the activity and creativity of the people in the village so the local community has a sense of belonging,” said Widodo.