Images of Iceberg off the coast of Canada Becomes Viral Sensation

Images of a large iceberg appearing of the coast of Canada have created a viral sensation. The iceberg, also known as the “beauty berg” because of its beautifully striking image, was first spotted off the coast of Newfoundland and Labrador by a local resident, Mark Gray. He took amazing pictures of the iceberg and posted them online, where it quickly went viral. 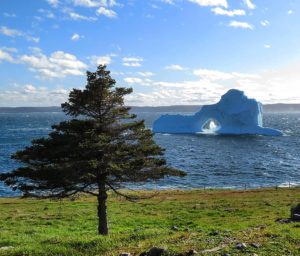 Newfoundland and Labrador is the eastern-most province in Canada. The region has been known to feature amazing iceberg sightings. Just last year, several people flocked to the small coastal town of Ferryland to catch a glimpse of a large iceberg that floated near the area. This year’s iceberg appeared in an area known as “iceberg alley”. Several icebergs float in this region as a result of the nearby glacial formations that can be seen off the coast. The province is also known as one of the best places in the world for viewing icebergs.

“On a sunny day, these 10,000-year-old glacial giants are visible from many points along the northern and eastern coasts,” says the Newfoundland and Labrador tourism website. “They come in every shape and size, with colors from snow-white to deepest aquamarine.”