Driver Put a Real Engine inside a Baby Barbie Car

There are a few toy cars that are made for little kids that can actually drive. Understandably, these cars are usually made to go really slow to prevent accidents from happening. But this group decided to supercharge one of these toy mini-cars by attaching a powerful car engine to it. And not only that, the car that they picked was a pink Barbie doll toy car. 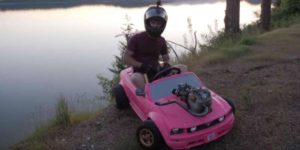 Having a revving pink Barbie mini car is exactly what the engineers at Grind Hard Plumbing Co had in mind when they took on this project. They had attached an actual full working engine to one bright pink Barbie toy car. The toy was a Power Wheels Barbie Mustang which retails at around $340. It is a battery operated car that usually runs on remote control. They installed a fully working Honda 240cc single cylinder dirt bike engine to the hood of the car. That’s significantly more horse power than what the toy company had in mind for the pink car. 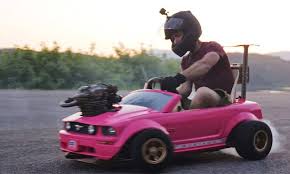 And they didn’t stop with just the engine. They had to make sure that the car would actually run, so they also installed proper wheels to the car to deal with the torque and the horsepower. After successfully installing the engine and testing it out, they took it for ride. They were able to drive the car and get it up to speeds of up to 72 miles per hour in just six seconds. The video of the supped up Barbie car and the mechanics of the project were posted online, where it quickly went viral.