Tennis is one of the most fast paced and exciting sports today. There is even an element of exhilaration when watching these events live. Almost anything can happen in a space of a heartbeat. But in a tennis event in Miami, Florida, the excitement had little do to with the players and how they were playing their match. Tommy Haas and Jiri Vesely were playing their matchÂ when an Iguana decided to steal the show.

A large Iguana was first spotted dangling from the large scoreboard located by the tennis court. It attracted the attention of the fans in attendance because it was dangling upside down by its tail. It eventually perched atop the scoreboard where it seemed to be watching the match. Vesely asked the umpire to remove the animal, to which the umpire replied that it would not be a bother to anyone and that the Iguana was not a dangerous animal. Haas took this moment to approach the lizard and take a selfie, much to the delight of the crowd. 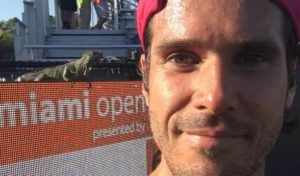 Eventually, the iguana did become a distraction when it decided to join the match and walked right into the middle of the tennis court. At that point, members of the stadium staff decided to catch the animal for the safety of the players and for its own benefit, but that proved to be easier said than done. They tried to catch the lizard by the tail and by throwing a towel over its head to keep it from moving, but these efforts were fruitless, but the crowd seemed to enjoy these antics. Eventually the staff was able to capture the animal and remove it from the tennis court. Vesely ended up winning the match against Haas with the score of 6-7 (5-7) 6-3 7-5..