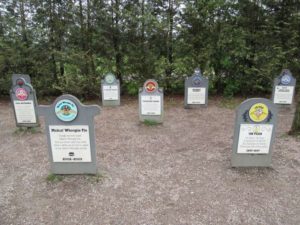 The physical graveyard can be found in the Ben and Jerry’s factory Waterbury, Vermont. In the cemetery, there are flavors that have been laid to rest and that are no longer produced by the company. The physical graveyard was built in 1997 with only four flavors being laid to rest on an actual plot. Those flavors were Dastardly Mash, Economic Crunch, Ethan Almond, and Tuskegee Chunk. Now, the graveyard has more than 40 different flavors that people can visit. 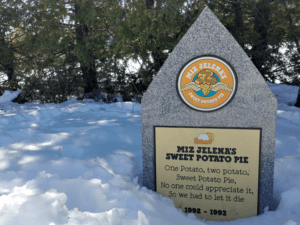 The small plot of land behind the ice cream factory display rows of granite headstones, each one dedicated to the flavors that have been discontinued. The headstones also feature short quirky poems. Found in the graveyard are some of the most outrageous flavors that Ben and Jerry’s have tried to sell. This includes flavors such as Sugar Plum (plum ice cream with caramel), and Oh Pear (pear ice cream with almond and fudge).

“Ben & Jerry’s is known for outrageous, chunky, funky flavors,” said flavor expert Eric Fredette in a press release, “But experimentation comes with risk, and not everybody likes our edgier ideas. Like everything else, ice cream flavors have a beginning and an end.”