In a mine in Zambia, a rare 5,655-carat emerald was found. The gem was said to be worth as much £2 million. The gem, now called the Lion Emerald, was found earlier this month at Kagem, the largest emerald mine in the world. It was found by geologist Debapriya Rakshit and miner Richard Kapeta. It was named “Inkalamu”, after the lion, and in honor of the animal conservation work being done in the area. 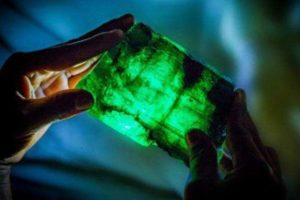 The gem was described to be extraordinary because it had “remarkable clarity and a perfectly balanced golden green hue”. According to tradition, only the most notable and rarest gems are named. The last named gem was in 2010 when a 6,225-carat stone was unveiled. It was named “Insofu” or elephant stone. It was sold in Lusaka, Zambia, to an Indian firm for an undisclosed amount.

“The discovery of this exceptional gemstone is such an important moment both for us and for the emerald world. We are experiencing strikingly increased demand for high-quality Zambian emeralds from the major brands, particularly in Europe, all of whom admire the rich color and unique transparency of our gems.” said Elena Basaglia, a gemmologist at Gemfields. 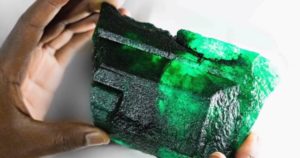 According toBasaglia, the emerald “will make its mark in the history books of exceptional gemstones”, suggesting stones taken from it “will continue its legacy for generations to come”. The emerald will be sold in a private auction in Singapore next month after being sealed before Zambian officials and transported to the Far East.