When it comes to Valentine’s Day and giving Valentine’s gifts, men are not always prepared. Even if our wives or girlfriends say they don’t expect anything, it still a bad showing to not have a Valentine’s gift for your significant other, even if it’s just your clichÃ© flowers or chocolates. This man almost had an epic fail of a gift when he gave his wife a $10 scratch-off ticket as a Valentine’s Day present. But it turned into an epic win when the ticket actually won $100,000. 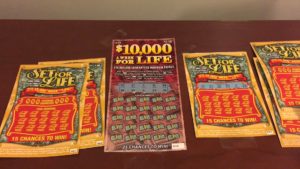 In Iowa, Don Holmes decided to buy his wife a Casino Riches scratch-off ticket for Valentine’s Day. Giving a $10 dollar scratcher does not exude romance, and in fact, some might see it as a cheap gift. But surprisingly, the ticket actually was a winner and won them $100,000. This effectively made the gift one of the best Valentine’s gifts ever. 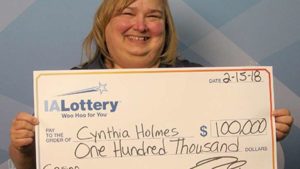 “My husband gave me a gift of a scratch off and I’m like, ‘Oh, that’s really expensive,'” Cynthia Holmes said. ”I scratch it off. I won $100,000!” The 54-year old Holmes said that he couldn’t believe that the ticket had won them so much money. His wife said she also couldn’t believe she won until she actually went to the lottery headquarters in Clive and had the ticket scanned and confirmed.

“[The machine] went, ‘Woo-hoo!’ And I’m like – my hands started shaking and like butterflies in my stomach,” said Holmes, “It is still sinking in.” Holmes claimed the second of 8 top prizes worth $100,000 available in the Iowa Lottery’s new “Casino Riches” scratch game.