Earlier this week, a polar bear was found in the early morning eating on a few supplies of a hotel located in Norway. The polar bear was discovered by the hotel staff after it had broken into a store room and helped itself to a selection of wine and chocolates. The bear had gotten itself into the storeroom but was having a hard time getting out. 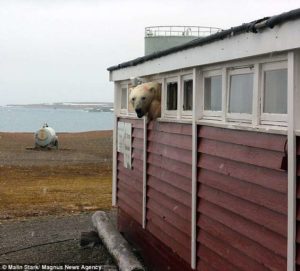 Hotel staff member Malin Stark was working the early morning shift at the Isfjord Radio Adventure Hotel on the Island of Spitsbergen, Norway. She checked on the supplies of the hotel and got the shock of her life when she found a Polar bear inside the stock room. She didn’t actually see the bear in the storeroom but saw its head pop out from one of the windows. Malin quickly called the authorities when the bear was trying to get out. 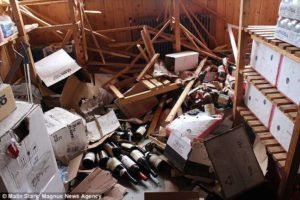 ‘I was on my way to breakfast shift when I saw the garage door to the hotel had been completely destroyed,’ she said. ‘I saw two big muddy paw prints and knew it was a polar bear. I got really annoyed because we just replaced that garage door after it was also demolished by a polar bear in February.”

The bear had gained access through a garage door which it had destroyed. There were some paw marks found on the wrecked door. Once a helicopter had arrived, the bear was spooked and the pulled itself free and ran to the wilderness, leaving Malin to check on the damage that it had done to the storage room.