Earlier this week, an 8-year old came back to school after battling with cancer treatments for over 15 months. It was an experience that was very challenging for the brave young girl, but with the help of her family and her doctors, she was able to endure it all. Her return was marked by an outpouring of love and support as hundreds of people showed up at her school to welcome her back. 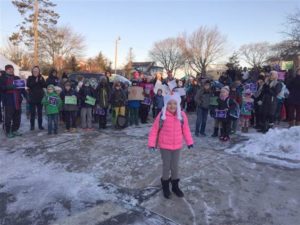 Over 100 people were waiting outside the Merrymount Elementary School in Quincy, Massachusetts. These were teachers, classmates, parents, and even police officers. Â There were some that held up signs welcoming the arrival of 3rd grader Bridget Kelley. Kelly was diagnosed with lymphoblastic leukemia in 2016. She then spent close to 100 days days in the Boston Children’s hospital undergoing chemotherapy and surgeries.

“She had to live in isolation,” said Megan Kelley, Bridget’s mother, “We couldn’t have anybody in the house. She understood that the cancer was serious, but it was almost more devastating that she wasn’t able to go to school or soccer or dance or birthday parties.” 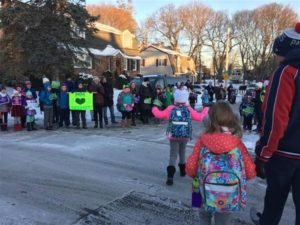 At first Megan thought that the party would be a little too much for her daughter, who spent so much time being alone. But little Bridget welcomed the crowd with a big smile and her arms raised in triumph. The welcome party was organized by one of Bridget’s classmates. She initially invited 50 people, but more than 150 people showed up to the school the next day.

“We had anxiety about sending her back to school because we were so trained to avoid germs, but it was also such a relief,” Megan said, “It’s like we’re finally on the upswing now that she’s allowed to come back.”