Hundreds of fans of Elvis Presley wore large sunglasses and Elvis wigs to celebrate The King of Rock and Roll in an Elvis festival in Sydney, Australia. The annual festival is held in the small town of Parkes and attracts thousands of people from all over the country. This year’s festival will be the 26th year. The 4-day event is expected to attract around 25,000 people from all over Australia. 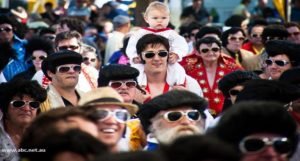 The focus of this year is celebrating the 50th anniversary of Elvis’s 1986 “comeback special”. The special was a small unplugged show that was credited in reviving his career at the time. The festival includes street markets, lookalike contests, parades, a car show, and several displays of old Elvis artifacts. There are even tribute performances from the many Elvis impersonators that will be attending the event.

“It’s a must for all Elvis fans,” said tribute artist Kingsley Rock, whose website promises: “If you want the King to sing at your thing, give me a ring. It’s just one big party and everyone there loves Elvis. Why wouldn’t you not come back year after year?” he added. 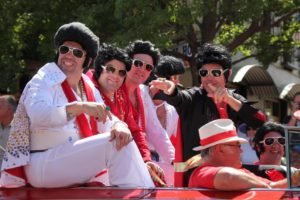 Elvis Presley was one of the biggest stars in the 50’s and 60‘s and he is widely considered as a musical and cultural icon. Elvis is known the world over by his name, but he is also sometimes referred to as the King or Rock and Roll, or quite simply “the King”. He was a successful recording artist selling over 600 million records worldwide. Elvis passed away at his home in Memphis, Tennessee, at the young age of 42.