In downtown Los Angeles, feathers started to litter the streets as hundreds of people with pillows began to whack each other in one of the biggest pillow fights to date. People of all ages, including children and teenagers, Â were swinging away with their pillows for more than an hour in the annual pillow fight event. The fight is done in honor of International Pillow Fight day, which is on April 1. Los Angeles has been hosting the annual pillow fight since 2008. More than 25 cities from all over the world celebrate this occasion. 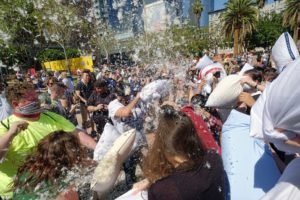 While some people were wearing casual wear, some had taken to heart the “Slumber party” theme of the event and wore pajamas and other sleeping attire. There were even some patrons that had masks and goggles to protect their faces from rogue pillow hits. By the time the event was finished, the streets of Los Angeles’ Pershing Square was full of feathers from the hundreds of pillows used in the event. 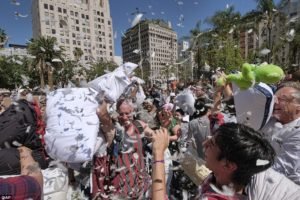 The event held in Los Angeles was in coordination to another Slumber Party that was held in the other side of the country in Washington Square Park in New York City. Despite many people swinging away with all their might, there was little to no injuries reported during the melee. Organizers were keen to remind people that the ideal pillow fight is one that leaves no trace or marks. They also warned all patrols to use only the softest of pillows. People who attended both events were also encouraged to bring a garbage bag or a rake to help keep the parks clean after all the festivities had died down.