Earlier this week, a Humvee military vehicle was pushed out of an equipment transporter plane and landed in a residential area. The only problem was that it wasn’t supposed to land there, but on a target that was seven miles away. The Humvee landed on a garden between two houses on a residential area. Thankfully no one was hurt. 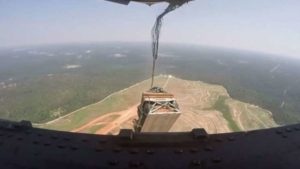 The three-ton military vehicle came down in an area that is usually where children like to play, but the area was empty when the Humvee landed. The garden area was located in Johnsonville, North Carolina, in a property between two houses. Witnesses reported hearing a “boom” when the Humvee landed, and saw the parachutes come slowly down around the vehicle. 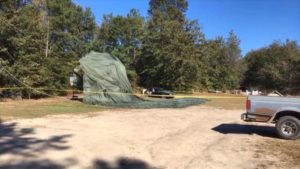 “I was walking, next thing I know I see one parachute right there and then I heard a boom. I just took off, and didn’t look back.” said one eyewitness. The vehicle was dropped by a C-17 cargo plane as part of an exercise by soldiers from the Airborne and Special Operations Test Directorate. The airplane was based at Joint Air Force Base Charleston and the drop zone was supposed to be in Fort Bragg. 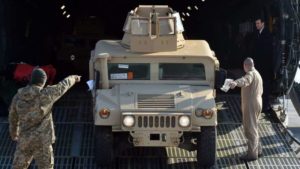 “After the big bang I turned and looked and saw these big balloons coming towards the house here.” said another witness, “I panicked ’cause I thought it was going to cover the house or cover me up. I didn’t know what it was.”

“A load of some kind was released early and we’re looking into how it happened,” said Michael Novogradac, a spokesman for the US army’s Operational Test Command. An army ground crew was sent as soon as the vehicle had landed.