For the first time in over a century, humpback whales have been spotted off the New York Harbor. And the recent sightings haven’t been isolated incidents. There have been several reports of locals and tourists finding these marine mammals breaching the water just off the coast of New York City. The last time that these whales were seen in these waters was the early 1900’s. 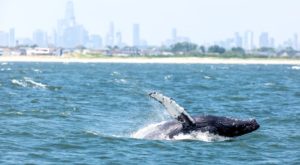 “Because of the improvement of the water quality, algae and zooplankton have multiplied, giving good food for the menhaden [a small oily forager fish beloved by whales], which have returned in numbers that the fishermen say they have not seen in their lifetimes,” says Paul Sieswerda, the founder of Gotham Whale, a company that monitors the presence of whales, seals, and dolphins in New York City. “Our surveys show an exponential increase in the number of whales since 2011 when we first began our studies,” he added. “Prior to that, whales were only seen intermittently.“ 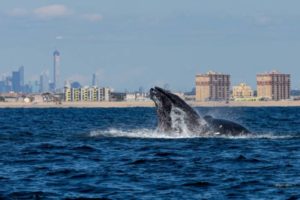 According to Sieswerda, the whales are coming to the New York area to feed before continuing their migration to the Caribbean waters for the winter. The clean waters of the coast, caused by recent legislation to protect the environment, has lured the fish back to the city’s coast, giving whales and other marine wildlife food to eat.