Couple Gets Engaged and Married on the Same Day

Earlier this week, a man surprised his girlfriend when he suddenly got down on his knees and proposed. But the surprises didn’t end there. When she said yes, the newly engaged couple got married just 90 minutes later. But this wasn’t just a spur of the moment decision. The groom had been planning the entire thing and even got members of both their families to be there in attendance. 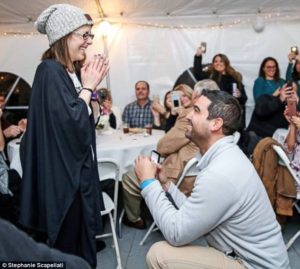 It all started when Nicole Carfagna saw that there was a lot of commotion in her home as she arrived with her boyfriend, Danny Rios. She didn’t know what was going on or why there were so many people in her house. Then she turned a corner into her backyard and realized that their entire families were there next to a tent. When he said ‘You know how much I love you, right?’ she realized that she was about to be engaged. He got down on one knew and proposed while their favorite Coldplay song played in the background. She said “yes”, but the surprises didn’t end there. 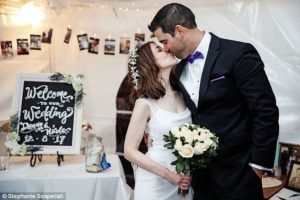 “I was like, ‘If you want, your mother and I picked out a dress; my suit’s hanging there. We can get married tonight. My dad just got ordained this morning and we could go to bed tonight with you as my wife,'” said Rios. He had been there for her through six years of suffering through lupus and never left her side. It was something that she and her family took notice of. Rios had planned the entire thing with the help of both families.

“I actually ended up turning into a bridezilla because some things didn’t go right,” he said, laughing.