Earlier this week, Lauren Ansell returned to her home in Queensland Australia after a day out. But when she got there, she wasn’t alone. She noticed that there was a giant spider on the sliding glass door to her patio. At first she decided not to mind the spider as it was on the other side of the glass, but then she realized that she would not be able to use her barbecue on the patio to cook dinner. 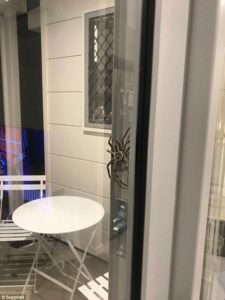 Ansell then called on her boyfriend to try to get the spider to leave but the large arachnid refused to move. According to Ansell, they tried to make it unhappy and poked and prodded the spider but they could not make it leave. They were essentially trapped inside their own house because of the large spider. It was getting a little uncomfortable because they were unable to cook their food for a meal. To show just how big the spider was, Ansell held their cat up near the spider for reference. 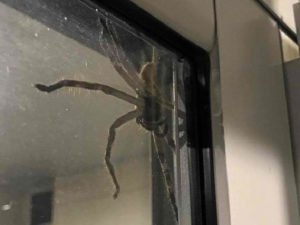 “We nicknamed the spider ‘Aragog’ from Harry Potter, and feel the spider has run into the forbidden forest.” says Ansell. Eventually the spider got tired of the glass and ran off into the garden. The spider that was on the glass was a Huntsman spider. These spiders can grow to up to a foot long in leg span. Australia is known to host among the most venomous spiders in the world, but despite their intimidating size, the Huntsman spider is actually not a danger to humans. They are actually helpful because they prey on insects such as cockroaches.