Ed Sheeran is one of the most successful recording artists today. But not all people know that the 26-year old singer had once suffered from a speech impediment as a child. When Sheeran was just 9 years old, he listened to hip hop rap album by Eminem. The album was given to him by his uncle as a gift. But the gift did more than expand his musical tastes, it also helped with his stammering and stuttering.

According to Sheeran, rapping along with explicit lyrics of the Detroit-based Eminem helped with his speech impediment. And Sheeran did not stop there. He soon added several rap artists including 90’s legends Tupac Shakur, Biggie Smalls, and Dr. Dre. While these artists and their work are known for their explicit content, they areÂ also widely considered to create the best hip hop music produced. Their music was influential in crating the voices of modern rappers such as Jay Z and Kendrick Lamar. They also helped a small red-headed boy from Suffolk, England get over his stuttering and stammering. 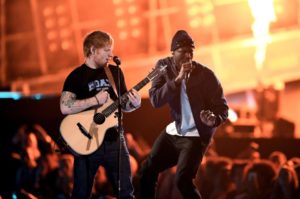 “My parents didn’t know the content of the album, and I must have been nine when it came out,” he said. “And when you’re nine and someone is saying rude stuff, you want to learn it. So I learned all of the album back-to-back and he raps at such a fast pace that my stammer would go when I rapped.” Sheeran was awarded for his achievement of overcoming his childhood condition. At the event of the award, he was able to meet and talk toÂ many kids were able to overcome their speech impediments through music, just like him.