Recently, a selfie photo of a couple of police officers from the Gainesville Police Department has gone viral. The photo has been nicknamed as the ‘Hot Cops Selfie’ and was taken as the officers were responding to help with relief efforts with the hurricane Irma. The photo was posted on social media, which has been shared and liked by women all over the world. 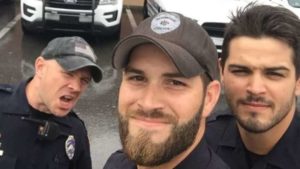 The three police officers posted the pictures on social media, but the Gainesville PD also posted the same picture and tagged the offices in them. The running joke is that the picture has women all over the country considering breaking the law, just to be arrested by the handsome cops. The selfie has taken more than 160,000 comments, 247,000 shares and half a million likes. The Police officers in the picture were Officer Nordman, Hamill and Rengering. 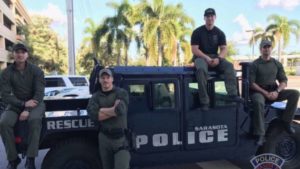 Because of the amount of attention paid to the picture, the police department issued a response. In the response they said: Â “1. We are dying with the comments. You’ve actually made our chief blush with some of them.2. Mrs. Nordman and Mrs. Hamill have also enjoyed knowing how millions of women are going crazy over their husbands. 3. We can confirm that Officer Rengering (far right with the amazing hair) IS SINGLE. 4. On another note, Officer Rengering is being placed into Cougar Prey Protective Care, similar to the witness protection program for his safety. 5. Please do not call 9-1-1 and request this group respond to your ‘incident’, and 6. There WILL be a calendar.”

“Thank you all for the hilarious comments. They have brightened our time up here. As for the calendar, we are going to try and do something fairly quickly and funds raised will go to Hurricane Irma recovery here in Florida,” finished the statement.