Students at a high school in Arizona performed something special for their homecoming audience. They performed a unique “Harry Potter” dance routine. The dance was performed by the dance team from the Walden Grove High School in Sahuarita, Arizona. It told the story of Harry Potter, from when he was accepted to the wizard school of Hogwarts up until he met his nemesis Voldemort. 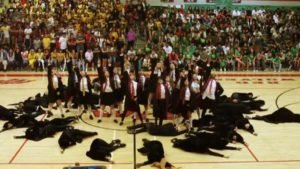 The video of the magical dance was posted on social media, where it quickly went viral. The high school has its own YouTube page, and the Harry Potter dance has been viewed more than four million times. The students that performed the dance had no dance experience before joining the PAC Dance team, but they were trained by a choreographer.

This isn’t the first time that the school’s dance team has gone viral. They also went viral with their dance interpretation of the “Wizard of Oz” which they performed last year. That dance routine received more than three million views of YouTube. They even tried to present the Wizard of Oz dance in “America’s Got Talent” show, but they were eliminated in the quarterfinals. The year before that, the dance team performed a Pixar-themed routine with characters from “Toy Story”, “The Incredibles”, and “Finding Nemo.”

“I think we’re so successful because of our hard work,” said one of the students, “It’s definitely not luck, and it’s definitely hard work. We practice almost every day and we do a lot of team bonding. We’re a family. So it makes us dance as one.”