High School is a very important time for any teenager’s life. Most of our best, and sometimes worst, memories are formed during the four years that we spend in high school. One of the most precious and important memories are the ones we have playing a team sport for our school. It is an experience unlike any other. It was something that this high school wanted one of their students to experience, despite the fact that he was disabled. 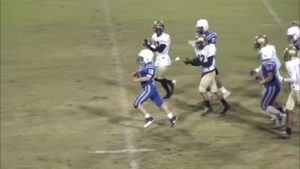 Atlee High school senior Sepp Shirey is a dedicated member of the school’s football team. His cerebral palsy limits his ability to walk, but that hasn’t stopped him from being there every game of the season, wearing his complete football gear. Because of his disability, Sepp often needs crutches to walk. But on Friday night, during the last game of the season, Coach Matt Gray put Sepp in the game. 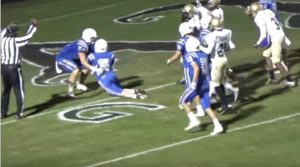 Coach Gray alerted the referees that Sepp was going to be taking the field. The referees in turn, told the other team’s coach Stu Brown, who relayed the news to his players. During the last play of the game, Sepp received the hand-off from the quarterback and players on both team opened a path for him to run the ball down the field. Players from both teams cheered him as he ran with the football for an 80-yard touchdown. Sepp crashed into the end zone, falling into the arms of one of his teammates.