Airports are among the busiest places in the world. Millions of people from all over the globe travel in planes all year round. This makes airports a virtual melting pot for all kinds of people of all ages from many different countries traveling to a variety of destinations.

There can also be a lot of stress in airports, especially for people who are travel weary, tired, and sleep deprived. But sometimes there can be unexpectedly funny and hilarious moments that occur in these situations. Here are just a few captured on camera. 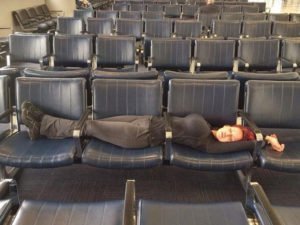 Sometimes it can take hours waiting around in the airport, especially if there are numerous delays. It can be challenging to find a comfortable spot to sit in, let alone lie down and take a nap. But this woman found an ingenious way of getting some needed shut-eye. 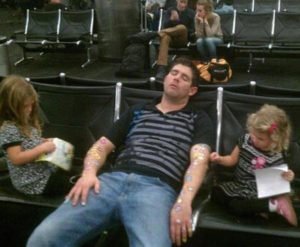 Traveling in itself is tiring, and it can get downright exhausting when you are also taking care of two young kids. A passenger snapped this picture of a tired parent who fell asleep while his daughters placed stickers all over his arms.