When Christin Gilmer was in the sixth grade, she received a note from her teacher that said “Invite me to your Harvard graduation.” It was meant to be encouragement and a compliment from one teacher to her student. But then Gilmer took it to heart, and 21 years later, she was able to do exactly that when she sent the invitation to the same teacher. 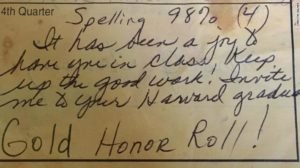 It was the end of the school year in 1997, when school teacher Judith Toensing wrote a very special note on the report card of Gilmer. The message said “It has been a joy to have you in class. Keep up the good work! Invite me to your Harvard graduation!” Gilmer kept the message even after 21 years. Gilmer is now 33 years old and earlier this week, she graduated from Harvard as a doctor of public health. At her graduation, she made sure to invite her teacher, Ms. Toensing. 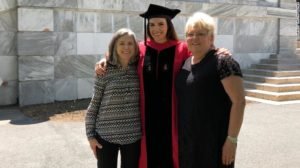 “It meant a lot to me to know that outside my mom, someone who knew me so intimately believed in my dreams and my ability to accomplish them,” Gilmer said. She also said that she wanted to pursue a career in public health because Toensing always encouraged her students to think of ways that they could help each other.

“She lit a fire in me that helping people is a powerful tool, and through education, you can better serve populations in need. I will never forget her passion for others,” Gilmer said.