It takes a lot for a kid to save up his allowance. The discipline to not spend and the determination to save it for a long period of time is impressive for a youngster. So you can imagine the level of sacrifice it takes to donate all savings to charity. This 7th grader from Indiana donated what he had saved up for video games and gave it instead to a local food pantry. And this wasn’t just a piggy bank full of coins, either. This generous little boy gave $450 worth of savings. 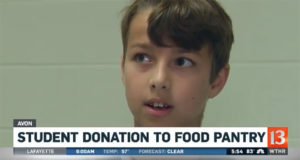 Brecken Hayes is a 7th grader at the Avon Middle School North. He had saved a lot during the past year so that he could get his favorite video games. He had saved enough money that not only could he get his video games, he had enough to get an entire console player. But after learning that the local pantry at his own community had a food shortage, Hayes chose to give all of his money to the pantry to help those that were in need. 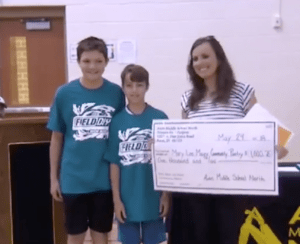 “I don’t really need that stuff,” Brecken said in an interview. “Those are wants. People need food and water to live. And they don’t have that. And I already have it. So I don’t want to be greedy. I just wanted to help them.” Brecken’s donation was almost half of what the entire school donate ($1000) to the Mary Lee Maier Community Pantry. The money donated will help keep food in the shelves and enable the pantry to stay open while they wait for more funding. Hayes’ generosity hasn’t gone unnoticed. His story was posted on social media, and has since gone viral.