Earlier this week, a grocery shopper unexpectedly showed off his singing chops to the surprise of his employees and customers at the supermarket where he works. The moment was caught on video as the man stepped in front of a microphone and belted out an impressive rendition of the Christmas carol “Oh Holy Night”. 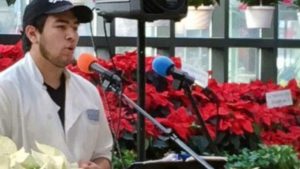 The grocery shopper’s name was Gilly Assuncao, who works at Russo’s in Watertown, Massachusetts. Assuncao was just working as usual one day when he sang the Christmas carol to the surprise of the people around him. The video of Gilly has since been posted on the internet where it quickly went viral. The original video was posted on the Store’s official Facebook page. Since then, the video has been seen more than 55,000 times since it was posted last weekend.

Assuncao works in the store’s deli and he was working Friday night just as a man came to set up the sound system for the carolers. The carolers were set to perform at the store on the weekend. Then Gilly was asked to help out with the sound check.

“I heard him say, ‘Test 1, 2, 3’ and I offered my help and said, ‘Do you want me to sing a song while you fix the sound system?’” Assuncao said. “So I sang a song and my boss heard and he asked if I could sing a few songs on Saturday.”

The 23-year old Assuncao said he was a professional singer before he moved to America from Brazil two years ago. He jumped at the opportunity to once again perform in front of an audience. He says that his goal has always been to get back into the music business, and hopefully this viral video will help him achieve that.