When Janith Goedde and her husband Joe were celebrating their 60th anniversary with her family and friends, one of them asked her to try on her wedding dress, as a joke. But Judith knew exactly where her wedding dress was in the attic of her home and decided it was a good idea. She sent one of her children to fetch the dress to try it on. Sixty years since she wore it to her wedding day, and the dress still fit her. 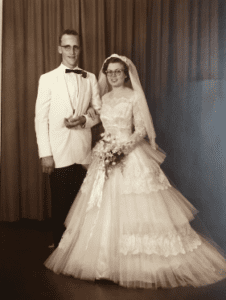 Janith Goedde married Joe on May 11, 1957 in Haubstadt, Indiana, exactly 60 years ago. This was also when she first tried on her dress. According to their 23-year old granddaughter Allison, Janith had recently lost a lot of weight and it showed on her. That’s what gave her the confidence to try on the wedding dress. Janith said it was a little tight, but it still fit. She also mentioned that the dress was in good shape, despite the fact that she just kept the dress in a plastic bag in the attic. Joe told the press that after all these years, Janith still looks beautiful. 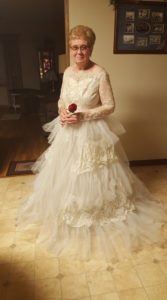 “I have been taught so many things about how to love unconditionally from Grandpa Joe and Grandma Jenny. Most importantly is to pray together. They pray the rosary every day after they eat lunch, it’s so inspiring,” Alison said.Â  “We are a big and blessed family.” Allison also mentioned that her grandparents served as relationship models for her and her family. You could say that this old couple has embodies the hashtag #relationshipgoals.