One of the most savage attacks on US soil was the surprise attack of the Japanese on Pearl Harbor in 1941. To be able to survive such an experience will not only change your views, it will also change your life. So when Delton Walling turned 96 years old, he decided to celebrate it in a way that would make the most of his second chance in life. The man they called “Wally” celebrated his birthday by jumping out of an airplane.

For his birthday, Wally setup to skydive over Lodi, California. He has skydived before, but because of his old age, this trip will probably be his last skydiving attempt. He told reporters that each time he attempted something like this, it made him feel good. This experience, and other many experiences he had gathered in nearly a century in our earth is what he uses as inspiration when he gives motivational speeches. He spent most of his life in the military (enlisting when he was only 19 years old) and he does not regret a moment of it. 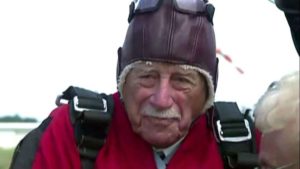 One of the most moving experiences he went through was not an adrenaline rush. Wally says that each time he returned to the site of the attack on Hawaii, he experiences something profound. According to Wally, it was a terrible scene, and everyone on the ground was devastated at the events that were occurring and the events that would occur next. It were these feelings and experiences that would stick with him for the rest of his life. The surprise attack on Pearl Harbor killed over 2,000 Americans and forced the US to join the Second World War.