Speeding in countryside roads is a very prevalent problem. This usually happens in these places becauseÂ there are hardly any traffic signs, let along any traffic enforcers or cops. Motorists are free to do what they want without any fear of being caught or reprimanded. But this Nottinghamshire grandmother had quite enough of the speeding cars in her street, so she took matters into her own hands. 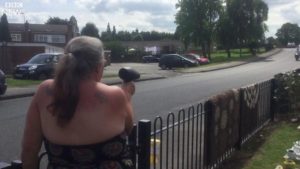 Jean Brooks of Nottinghamshire, England read somewhere that a woman in France had pretended to use her hairdryer as a speedometer. So the 64-year old decided to give it a try in order to prevent the cars driving down her street from speeding. And according to Brooks, it actually works. She says that cars that see her often slow down because they think she’s holding a hand held speedometer and they are afraid that they might get caught for speeding. 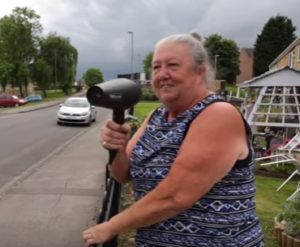 Brooks has since been filmed standing in her garden, pretending to clock the speeds of the cars that pass by her house. A local news team has even taken a video of Brooks and her roadside antics, and her video has since gone viral. Despite her fame, she till continues to monitor her street, where cars still slow down for her, not realizing her device is actually used to dry her hair. Brooks says she will continue to guard her street with her trusty dryer: “This is a very fast road and there are a lot of children in this area. I am worried that one could be killed or seriously injured.”