Grandma, Mother, and Baby All Share the Same Birthday 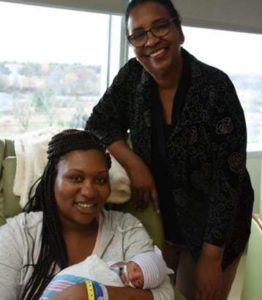 The new mother Theresa Dunn was born on November 19, 1986. Her mother Clara Gregory predicted that her daughter would be born on the same day as her own Birthday. The doctors had predicted that Theresa was going to be born around thanksgiving, but Clara was sure and kept telling her doctors that her child would share the same birthday as her.

“We always joked for many years before I got pregnant and my mom said, ‘If you have a child, it will be born on your birthday,’” Dunn said. Dunn’s first child, a 2-year-old boy named Mason was born in April. Then when she got pregnant again this year, her doctors estimated that her baby would be born on Christmas. Then Dunn developed preeclampsia early on in her third tern, and it became a high-risk pregnancy.

“When my condition started getting worse, my mom was like, ‘I think he is going to be born on your birthday,’” Dunn said. Â “I was in labor for three days. He was not coming out on the 16th, 17th or 18th. Saturday evening, I realized he might be born on my birthday.” Dunn had emergency c-section and gave birth to a healthy baby boy named Micah on her birthday, and the birthday of her mother.