77-year old Jackie Page has had nothing to drink but her favorite soda for the past 64 years. This great-grandmother has declared that she would not drink anything else but her favorite: Pepsi cola. She first started drinking the carbonated drink when she was 13 years old and she hasn’t stopped since. She has been drinking an average of four cans of soda every day. She has even said she wouldn’t drink water even if she was dying of thirst. 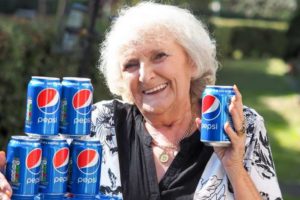 “I don’t call it an addiction. It’s just something I like and I can’t help it if I don’t like anything else,” says the retired mother of four. “Some people might think it’s weird and that nowadays you shouldn’t drink Pepsi. But I don’t care and I won’t settle for anything else. I wouldn’t drink water â€“ no way. Not even if I was dying. And I won’t drink tea or coffee.” 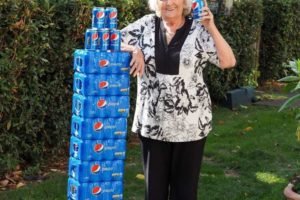 Jackie insists that she has always been slim, fit, and healthy, despite consuming the equivalent of three million sugar cubes in her life. She says she keeps fit by exercising. Until she was 60, she would go line dancing, but she can’t now because of her age. It is estimated that she has consumed more than 93,000 cans of the soda. She prefers the canned version and does not like the bottled kind.

“I didn’t like milk or water. My mum used to say ‘you have to drink something’. I know she used to give me lemonade or cherryade,” says Jackie