Earlier this week, Cara Treherne and her party were enjoying a regular round of Golf in South Africa until they arrived at the 14th hole. There, they saw two large venomous mambas fighting at the tee. She and her party stopped to watch as the two reptiles battled it out. But she was also able to take a few pictures and even a video of the two snakes locked in combat. 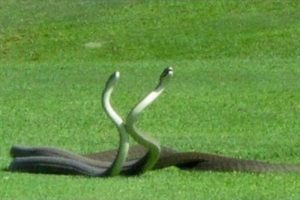 “I drove up a small rise and saw movement out of the corner of my eye. At first glance, I thought it was a spitting cobra that had its hood up, but after a closer inspection, I then saw it was actually two mambas,” Treherne said. “I quickly flagged the other 2 players in my four ball to slow down. It was amazing to watch and seemed to go on for ages. We debated about carrying on playing the hole, but after a little while longer, we decided to drive past them at a wide berth and go to the next hole.”

Treherne was able to alert all the other golfers and their groups about the snakes before they entered the 14th hole. Almost all the golfers stopped from playing and watched the two snakes duke it out. Treherne even called her husband and asked him to bring their son to watch as the snakes fought in the manicured grass of the golf course. According to Treherme, the snakes eventually tired out and went their separate ways. She says they had a difficult time focusing on golf for the next few rounds as all they could talk about was the epic snake bout they all witnessed.