The newest tourist attraction in Vietnam is the 150-meter long Cau Vang bridge located on the Ban Na Hills. The bridge is also known as the Golden Bridge of Cau Vang. The bridge is found in the forested hills of Danang in Central Vietnam. The bridge is being held up by two gigantic concrete hands and has been drawing a lot of tourists from in and around the area. 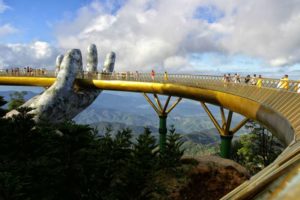 The golden bridge was designed to make the people feel as if they were walking across a golden highway being held by the hands of God. Aside from the usual tourist advertisement, the bridge has also garnered a lot of attention because of photos being posted on social media. The architect of the bridge, principal designer and founder of TA Landscape Architecture, Vu Viet Anh, said he did not expect the bridge would attract so much attention.

“We’re proud that our product has been shared by people all over the world,” said Vu Viet Anh. The bridge snakes through the forest high in the mountains. The pathways there were first developed by French colonists in 1919. The general area is a major tourist attraction, with cable cars, French medieval villages, and ancient castles and cathedrals. 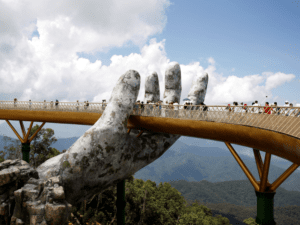 The only remaining signs of the French occupation are the crumbling ruins of the holiday homes that can still be seen from the cable cars. The Ba Na Hills was built by the Sun Group. It is the latest attempt in boosting tourist attractions in the country. Vietnam had 13 million foreign visitors last year, but it still a long way from the leading tourist destination in Asia, Thailand, which receives 35 million visitors last year.