Giraffe Helps Man with his Proposal

In Missouri, a man proposed to his girlfriend in a zoo, with the help of a friendly giraffe. Cody Hall wanted to make his proposal extra special for his girlfriend Makayla Blakey. He planned it beforehand and even got the officials at the Dickerson Park Zoo to help out. With their help, they were able to attach a ring to a lanyard and hung it around the neck of Mili, a giraffe at the zoo. 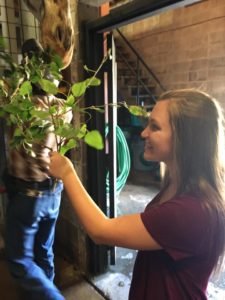 When the couple got there, Blakey just thought that they were getting a free pass to see the amazing animals behind the scenes at the zoo. The staff told the pair that they were going to feed the giraffe and that they were allowed to participate first hand. They gave Blakey a tree branch to feed the giraffe, and when the large animal craned its neck, Blakey found the ring hanging from its neck. It didn’t take long for Blakey to realize what was going on, especially after Hall got down on one knee. Blakey immediately embraced Hall and said yes. 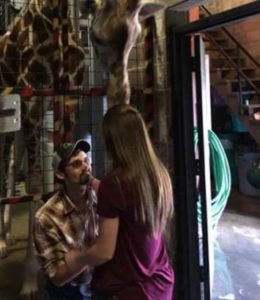 The zoo shared the photos of the unique proposal on their Facebook page, where it quickly went viral. Hall said that his friend Jesse Rollhaus, and the spokeswoman for the zoo, Joey Powell helped in planning the proposal and also in suggesting what to do. But Hall owes his biggest thanks to Mili, who cooperated and played her part perfectly.

“We think Mili should be your honorary ring bearer on your big day,” the zoo wrote in a post in social media.