Earlier this week, three brothers from Wellington, New Zealand found an enormous 14-foot giant squid that washed up on the shore. The images of the large sea creature were posted on social media, where it quickly went viral. The large cephalopod seemed to have died near the surface and the currents sent its corpse to wash up on shore in Wellington. 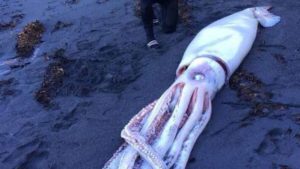 The three brothers that found the squid were the Dan, Matthew, and Jack Aplin. They stumbled upon the squid during the weekend. Dan is a member of the Ocean Hunter Spear fishing & Free diving Specialists in Wellington. The images of the squid were posted in the Facebook page of the club with the caption: “Wellington team member Dan had an interesting find in Wellington this morning!” The post has since gone viral being shared 6,000 times.

According to the brothers, they were driving near the Red Rocks reserve when they spotted something white and massive by the beach. They called the National Institute of Water and Atmospheric Research, and they scheduled to have someone pick up the colossal squid. Giant squids of that size are actually not uncommon. According to National Geographic, they can grow to as large as 33 feet, and weigh as much as half a ton. 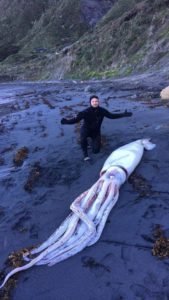 The largest squid that was ever found came in at 43 feet and weighed over a ton. Despite being one of the largest creatures on earth, not much is known about these large underwater animals because they live in the deep sea. Scientists have been only able to study them recently, because they started to wash up ashore. It was only in 2006 when the first giant squid was captured on film by the discovery channel.