A beach in Greece went viral after it was shown to be covered in a large spider web. The beach was covered by webbing that was around 300 meters long. The video of the spider web was posted on YouTube by Giannis Giannakopoulos. The video shows the beach at the town of Aitoliko found in western Greece. 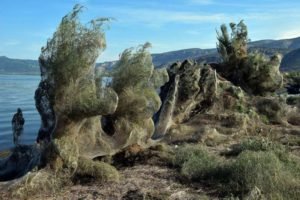 The web was made by the Tetragnatha genus of spiders. They are commonly known as stretch spiders because of their elongated bodies. These are actually very small spiders and they are light enough that they can run across water faster then they move across land. Despite the scary feel of the webs, the spiders actually don’t pose a threat to the locals of Aitoliko.

“These spiders are not dangerous for humans, and will not cause any damage,” said molecular biologist Maria Chatzaki. She also said that the phenomenon occurs when the spiders are mating, and that an increase in the mosquito population this year lead to the optimal conditions for a population boost in the spiders as well.

“The spiders are taking advantage of these conditions, and are having a kind of a party. They mate, then they reproduce, and provide a whole new generation.” Chatzaki also said that the phenomenon occurred once before in the region, in 2003. She also stated the spiders would soon die, and the web would degrade naturally, leaving the vegetation at the beach undamaged.

The photographs of the giant spider webs on the beach in Aitoliko have since been shared on social media, where it quickly went viral.