All Passengers and Crew Survive Plane Crash into Sea

Earlier this week, a passenger plane crashed into the sea after it missed the runway on an island in the Pacific. Despite crashing into the ocean, every on board (including the passengers and crew) survived the ordeal. The plane was a The Boeing 737-800 from Air Niugini, the national airline of Papua New Guinea. It was trying to land at Chuuk Airport on the island of Weno in Micronesia but then crashed in a lagoon. 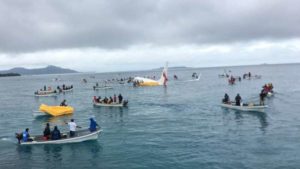 The story of the crash soon spread online and on social media. Several images and photos showed dozens of people on boats being rescued from the wreckage of the crashed plane. All 36 passengers and 11 members of the crew escaped without any serious injuries.

“We don’t really know what happened,” said Jimmy Emilio, the general manager of Chuuk Airport, “People were rescued by boats – 36 passengers and 11 crew members were all rescued, only the plane is sinking right now.” According to Emilio, the plane landed about 150 yards from of the runway and the cause of the crash was unclear. 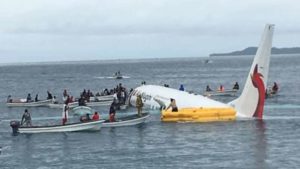 According to reports, local people helped with the rescue effort just minutes after the crash. Aside from emergency rescue workers, there were also ordinary people helping out. The Papua New Guinea’s Accident Investigation Commission said they would be sending investigators to find out what went wrong. So far, the most likely cause of the crash is human error, although this cannot be confirmed before an official investigation.