There are many different kinds of races all over the world. But probably the most unique race is the one-of-a-kind pumpkin race that is held in Lohmar, Germany. Racers paddle their boats that are made of giant pumpkins. These giant veggies are then hollowed out enough so that a person can fit inside. Then it is used as a boat and racers have to paddle across a lake in Western Germany to the finish line. 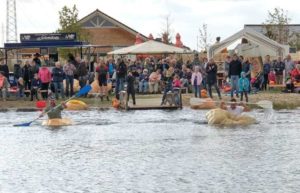 The race involves individuals with one paddle each trying to make through a course that is 35 meters (115 feet) long across a lake. It’s not as easy as it sounds, especially since each of the pumpkins weighs at least 250 kilograms (550 pounds). Each pumpkin is matched for the size and weight of each racer to minimize the risk of capsizing, but even with the best pumpkin, it’s hard to paddle across a lake inside a hollowed out vegetable. 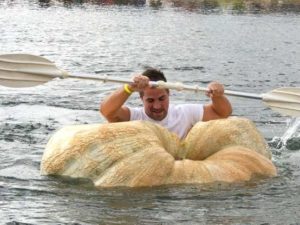 “It was hard fighting against the wind to get anywhere, but when you are in the groove it works. I imagined it would be more difficult,” said competitor Mailin Matuschek. “I actually thought that after a few meters you would fall in,” said her sister Jana-Mai.

There are several races to choose from at the site. There are six categories and each of the winners receives 200 Euros in prize money. There is also extra incentive for people that actually brought their own pumpkin and made it into a boat. These racers will have 300 Euros for prize money if they win their respective races.