Shipworms have been discovered for more than 200 years now. They were first discovered be explorers who found worms that ate the rotting wood off of their ships. But these worms were small worms that measures just a few inches. In a remote lagoon in the Philippines, researchers found shipworms that measured close to 5 feet in length. But much more than that, these worms seemed to be feeding, not on wood, but on biodegradable gas. 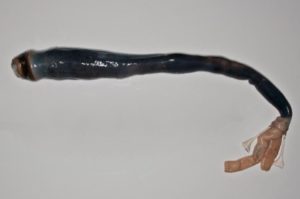 The giant shipworms, officially called Kuphus polythalamia, were actually discovered by chance. Scientists were on a trip in the Philippines when the saw a video from a local news station about the benefits of eating marine worms. The pictures of the worms shown in the programs were unusually large. The researchers then contacted their colleagues in the area and they were able to track down the sea creatures in a remote area in the Southern Philippines. The worms were found in the bottom of a lagoon that was once used as a mill for storing wood. According to the scientists, one of the reasons why the words were so big could be because the rotting wood eventually sank to the bottom of the lagoon and fed the worms. 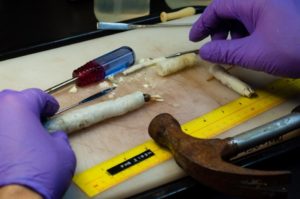 Typical shipworms were found to have large amounts of woody pulp in their innards, but these words did not have that material. In the findings, they discovered the worms had hydrogen sulfide in their guts. The gas was produced by festering wood and other materials that decomposed on the sea floor. This unique adaptation allowed these worms allowed these giant worms to live on the bottom of the seafloor where it would otherwise be uninhabitable. The worms were found to be living inside shells, similar to clams and mollusks, and the largest specimen was found to be 5 feet in length.