Seven year old daisy has always dreamed of going to Disney World. Not only is she obsessed with the cartoons and movies, but she is also a big fan of the character Belle from the movie Beauty and the Beast. But Daisy is also diagnosed with Achondroplasia, which is a form of dwarfism. This made it harder for Daist to fulfill her dream. But that was until the Make a Wish Foundation stepped in. 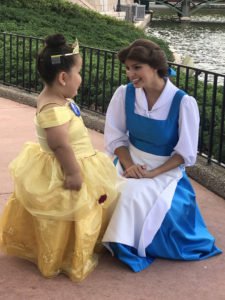 Because of her condition, Daisy required several surgeries in her young life. This included operations on her head, her neck, her legs, and her back. This is how most hospital staff got to know little Daisy and her dream. One of the nurses had an idea and nominated Daisy for a Make A Wish foundation. When the foundation found out about Daisy, they told her she could go anywhere she wanted to. She picked Disney World because she wanted to meet Belle. When they got to the park, Daisy’s mother informed Belle that she dreamed of meeting her. That’s when Belle decided to make Daisy’s dream come true. Not only did she personally meet Daisy, but she also gave Daisy and her family a tour of France. 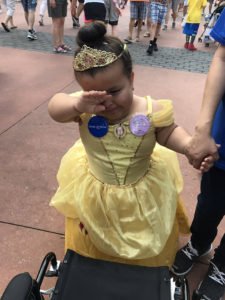 “Daisy was jumping up and down from excitement and was balling her eyes out when Belle told her she would take her on the tour,” Says Daisy’s aunt Patricia. “Daisy was sobbing from happiness, and everyone around her was crying, too. Disney characters never break character, but Belle almost started crying when she said goodbye to Daisy because she was so touched. For a day, Daisy didn’t have to worry about surgeries or doctor’s appointments. She just got to be carefree and have fun. Disney World, Make A Wish, and Give Kids the World really made a difference in Daisy’s life. They are all amazing organizations and people’s donations really do make a difference.”