George Clooney has always been known as ladies’ man and a hopeless romantic, so it didn’t surprise his fans that he pulled out all the stops to appreciate a special fan on her 87th birthday. Adams has always been a fan of Clooney and has stated several times in the past how she would just love to meet him one day. Pat Adams was being cared for at the Sunrise of Sonning home in Berkshire, England. The home is an elder care establishment that also offers nursing, dementia care, and assisted living.

The 55-year-old actor chose to surprise Adams on her birthday. Apparently, the staff of the home had written to Clooney to ask if he could appear and surprise Adams on her day of celebration. Â Although getting a movie start to visit can be difficult, there was a big chance that this could happen becauseÂ the American actor actually has a residence located near the Sunrise of Sonning home. 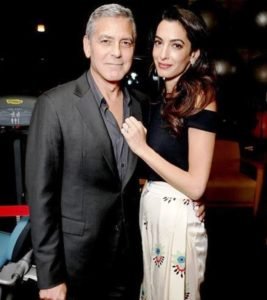 Clooney arrived on Adams’ birthday with a big smile and an armful of flowers. He rang the doorbell to the home, holding up the letter that the staff had sent him, and asked for Pat Adams. Although the staff had written to the actor, they were not expecting Clooney to appear and almost all the people that were there were in utter shock at his arrival.

George Clooney, along with his wife Amal, are expecting their first baby together this year. Earlier this year, Amal announced that she was carrying twins. Clooney and his wife bought a small home in 2014 located in Sonning, just a few blocks away from where Pat Adams now stays.