Industrial designers at General Electric have transformed large scanning machines such as MRI’s and CT Scanners into miniature theme parks to make it less scary for kids to get scanned. Most kids are intimidated and scared when they have to get scanned by these big and bulky scanning machines and their strange sounds. But these designers have made it so that these kids will be at ease and could even have a little fun while getting scanned. 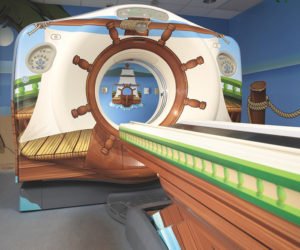 The lead designers for this effort are Erik Kemper and Doug Dietz from GE Healthcare Industrial. They helped develop the idea of turning the frightening process of getting MRI and CT scans into something that children could actually enjoy. The idea came to Dietz when he personally witnessed a terrified little girl about to get an MRI scan in a hospital.

“Everything was kind of like, beige,” he said. He also described the room to look like a ‘crime scene’, with stickers on the floor showing people where to go.”The room itself is kind of dark and has those flickering fluorescent lights. That machine that I had designed basically looked like a brick with a hole in it.” 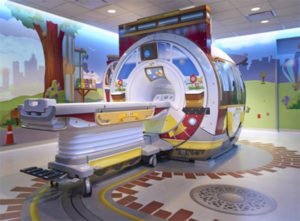 That’s when Dietz got the idea to transform the scanning process into a voyage on a spaceship, or a visit to a pirate island. Diets recruited help from artists to create a colorful and exciting design for the machine. He also enlisted technicians to become amateur actors with scripts for roles in his little adventures. In the initial tests, he drastically improved how children viewed the process and how much fun they were having as a result.