Garbage Men Surprise Their Biggest Fan with a Gift

In Ireland, the employees of a garbage collection company were told that one of the kids in their route was a big fan. The parents of the little girl told them about her and they asked if they could maybe give her a wave the next time that they would pass by their house in their route. But they had something bigger planned for their biggest fan. 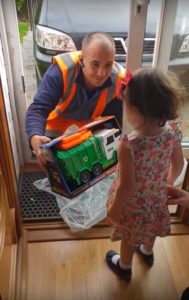 When the garbage collectors passed by the house, they stopped and got off the truck. Then one of them proceeded to knock on the front door of their biggest fan. When her mom opened the door, you could clearly see the little girl in joy for getting a chance to meet one of the garbage men. But that wasn’t the end of the surprise. They had a special gift for the girl. It was her very own garbage collection toy truck. 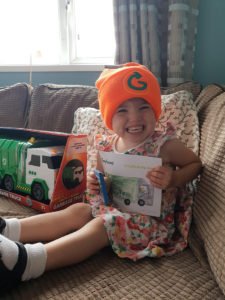 “I went to the bin men the week before and told them my daughter loves watching them and would they be so kind to just give her a wave next time, we only expected a wave which is why my daughter shouted he has a present and my wife grabbed her to go to the door, we had absolutely no idea and this was all the bin company Greyhound Recycling, the shock and enjoyment experienced by us all is genuine, faith in humanity restored.”

The father of the little girl took a video of the garbage collectors surprising his daughter and giving her a gift. He then posted the video on social media where it quickly went viral.