When the Tilkin Family decides to take family pictures, they really go for it. The Tilkins are made up of parents Wim and Daisy, and their kids Saida and Nando. When they pose for family pictures, they do so in full costumes. This all started with Wim celebrating his 50th birthday. As a special gift, he requested the family dress up in the costumes of their favorite TV show: the Game of Thrones. 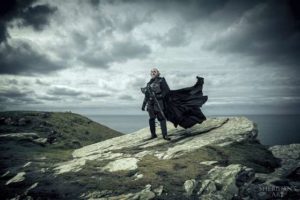 The family, who reside in Belgium, setup to travel to their favorite vacation spot in England to have a family photo shoot in a location that even looks like it could be set in Westeros, the realm of the Game of Thrones series. The entire Tilkin family was up to it, even the two adult children. But that’s not all they did. Not only did they wear costumes and travel to a location, they also made up a story line about their characters, that was inspired by the TV series. 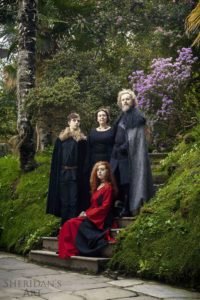 “The story we made is ‘in style’ with the series but has nothing to do with the characters and the books,” said Wim. The entire photo series was named the Goron Chronicles because the character that Wim plays was named Goron. According to Wim, Goron goes to battle and does medieval heroics. Wim even had to grow out his beard and hair for nine months so that he would look like the Goron that he had envisioned. Wim’s coworkers had even started to avoid him because of the way he started to look. The Game of Thrones HBO TV series is based on the bestselling books of George RR Martin.