Bystanders Lift a Car off a Trapped 7-year Old Boy

It was an ordinary day for Vijay Vadgama in Leicester, England when he witnessed something incredible from outside his window. He witnessed a little boy get trapped under a vehicleÂ after the car got into an accident. According to Vadgama, they were settling down to watch a movie with his girlfriend when they heard a loud bang outside, in the street. All they could hear were people yelling stop. He moved over to the window to record the events when he realized there was aÂ boy trapped under the car. That’s when 15 bystanders from all over the street rushed over and tried to help. 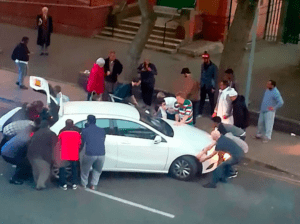 It took a lot of effort from everyone to lift the 2-ton Mercedes Benz off of the little boy and pull him out from under it. Soon, paramedics and police arrived at the scene, where the boy was then taken to Queen’s Medical Centre in Nottingham. According to authorities, the boy remains in the hospital where he is in critical but stable condition. The police arrived within three minutes of the crash, but by then the bystanders were already lifting the car off of the child. 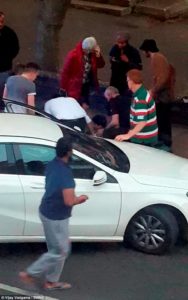 “People came from everywhere and started lifting the car off him,” recounts Vadgama “Here were people who live in the area and people coming out of the church, they all came together. They were able to get it off him very quickly. I couldn’t believe how quickly the community came together to rescue the boy from underneath the car.” According to the police, no charges pressed against anyone involved in the incident.