Earlier this week, University of San Diego junior Chris McCready stepped up to the plate with the game on the line. USD was down a run against their conference rivals Loyala Marymount. There were two outs and runner on base at the bottom of the 9th inning. Then Chris made the game winning hit, a walk off homer, and his first home run of the season. What makes this moment even more special was that just a week earlier, his mother had passed away and this was the night before his mother’s funeral. 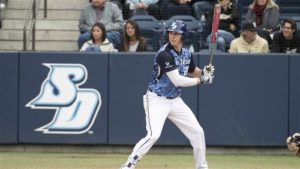 Susan McCready passed away from ovarian cancer earlier this month after fighting with it for almost a year. It was a devastating tragedy for Chris and his family, but they all learned to move on with their lives, albeit with a heavy heart. Then a week later, McCready stepped up to the plate for the big game. It had been 17 days since he picked up a bat. But before he took his stance on the plate, the 21-year old Chris pointed to the sky in honor of his mom. 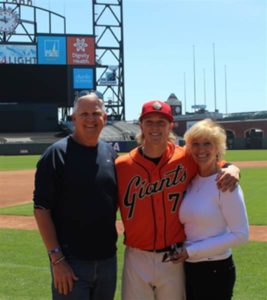 “Everything that had happened in the past week took the fear out of me,” said McCready. “I really didn’t have anything to lose and I had everything to gain in that moment. I just had a feeling my mom was going to do something special in that at-bat. I knew it was her the whole time.Â  I was wearing a bracelet of hers that I took from her dresser, and I just had a feeling she was going to make something happen. It was just such a perfect moment, she was there for me through everything, and this was a sign of her showing that she’s still with me no matter what.”