Gal Gadot’s career has taken off thanks to her portrayal of Amazon Warrior Princess Wonder Woman. But recently, the actress did something in real life that was very much like a superhero. She visited a children’s hospital in Virginia in full-costume. She visited the kids there and thrilled them with a personal appearance from Wonder Woman herself. 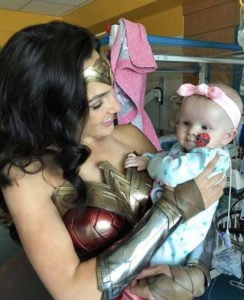 Gadot took a small break from filming “Wonder Woman 1984” in Washington DC and Northern Virginia area so that she could visit the Inova Children’s Hospital in Falls Church. Not only were the kids delighted to see the superhero, but even the adult patients and the staff were excited for the personal appearance. Staff members said that she brought joy and hope to the patients there.

“Thank you @GalGadot for visiting us @InovaHealth Children’s Hospital. You are a true Wonder Woman. The kids loved it…and so did the staff,” posted Dr. Lucas Collazo, one of the doctors at the hospital, on social media. Photos of Gal Gadot visiting the patients in full Wonder Woman gear has spread on social media and has since gone viral. 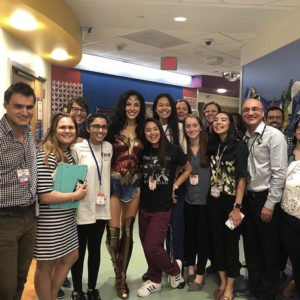 Gal Gadot’s performance in 2017’s Wonder Woman has been praised critically and has become a success commercially. It is, by far, the highest grossing movie in the DC universe/Warner Brothers film franchises. The upcoming sequel, Wonder Woman 1984, will be released sometime next year. Gal Gadot has always been a humanitarian and a charitable person. This goes all the way back to her pageant years when she won as Ms. Israel for the Miss Universe pageant in 2004.