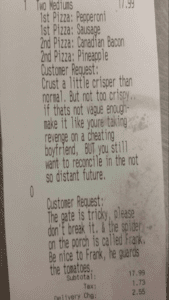 “Crust a little crisper than normal But not too crispyâ€¦ if that’s not vague enough â€” make it like you’re taking revenge on a cheating boyfriend, BUT you still want to reconcile in the not so distant future,” the note read.Â  “The gate is tricky, please don’t break it. And the spider on the porch is called Frank. Be nice to Frank, he guards the tomatoes.”

The picture of the receipt with these specific and hilarious instructions was submitted by a Reddit user named Rikardose. The post has gotten nearly 18,000 up-votes in just the two days since it was posted. It has gotten even more since. The most common discussion in the thread has been about some of the odd and funny instructions that pizza drivers and delivery people have received in similar experiences. 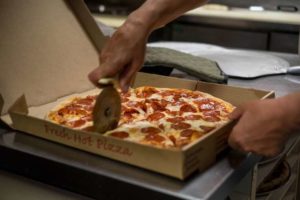 “Dude I used to love these sorts of deliveries. These are normally the guys that’ll toss you a five every time,” said a Reddit user named Sanguines. The discussion also turned to how much you should actually tip delivery people, as well as waiters and waitresses, with one industry veteran suggesting a 25-30% tip.