Franchise Provides Free Meals for Baby Born in their Restaurant

The Griffin family have always enjoyed going to the popular fast food restaurant Chic-Fil-A. They were there so much, that that’s where one of their children was born. Robert and his wife Falon were eating there one night when she suddenly went into labor. But even with the inconvenience, little Gracelyn was blessed with a wonderful gift. Chik-Fil-A decided to give her a lifetime supply of free food at their restaurant. 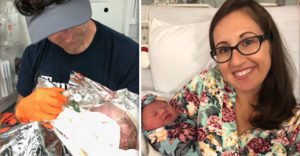 It was a normal Tuesday evening out for Robert and Falon when she began having her contractions. They were on their way to the hospital but they had to drop off their kids off first with a family friend. They were meeting at the local Chic-Fil-A. It was then they Falon had to use the bathroom. But the restaurant was closed. Luckily they let Falon in, but as soon as she got in she started to go into labor. And so Robert decided to deliver the baby then and there. 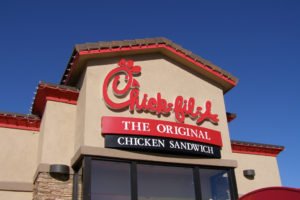 “I looked at her and said, ‘We’re going to do it right here, right now’,” Robert Griffin said. There were also some complications to the birth. “I stopped her at her shoulders because I saw what looked to be a white collar around her neck, and it was the cord that had been wrapped around her neck twice.” Robert managed to undo the knot and save his daughter’s life.

As a reward for the birth at the restaurant, Chic-fil-A announced that it is giving Gracelyn free food for life and a guaranteed job at 14 years old.