In Texas, a couple wanted to make the reveal of their baby’s gender special, so they made use of an airplane to make the event even more dramatic. 32-year old Brad Reed, and his wife, 31-year old Rachael, were expected their third child, and they invited all their friends and families to hold a party to divulge whether they were having a baby boy or a baby girl. They decided to ask help from a friend to make use of a plane for the reveal. 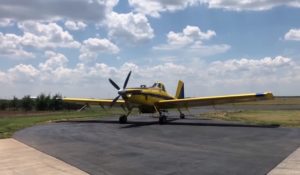 “My friend David does some crop dusting, where he sprays the plants with pesticides from an airplane,” Reed said. “Me and David came up with the idea to do an aerial gender reveal.” And so a week before the event, Brad and Rachael gave their friend David Sykes an unopened letter from the hospital that had the gender of their baby. Sykes had ordered both pink and blue dye to add to the water which would be dropped from the plane on Sunray Airport as Brad and Rachael, along with their family and friends would watch. 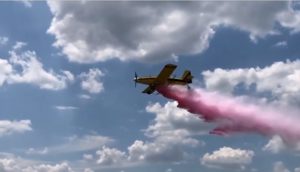 “It was a really fun day. When I was younger, gender reveal parties weren’t a thing, but they’ve become a really big deal now,” said the couple’s friend, Greg, who took a video of the event. The video shows the moment where pink water is released from the crop duster plane along with the celebration and applause of the people on the ground. It is the couple’s third child and their second daughter.